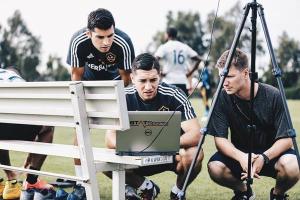 Technology in sport is having a major impact on measuring and improving a player’s performance.

Player tracking systems are one such area, as coaches working with elite teams are now insisting ‎on analysing a wide range of statistics on each player. A number of major sports have already endorsed the introduction of player tracking systems either live during matches, during training or both.

One such ‎sport that has embraced this technology is Rugby and with the Rugby World Cup this month, the technology will be extensively used by teams during training and live during matches throughout the tournament.

An Irish Company is at the front of this technology with a number of teams involved in this year’s Rugby World Cup.

STATSports began in 2008 when the two founders Alan Clarke and Sean O’Connor spotted a gap in the elite sports market. They realised sports teams across Europe could benefit greatly by applying sports science in order to analyse player loads during training and matches.

During this time they began meeting with coaches at elite teams to find out exactly what type of information they wanted to analyse. As it turned out, almost every coach felt the current products on the market did not match their needs; from this STATSports was born!

The two entrepreneurs decided to build a product, the Viper system, around the wants and needs of elite sports coaches. The Viper system is now used by the best teams in the world across multiple sports in top competitions including the Premier League, NFL, NBA, La Liga and many more right through to teams involved in the Rugby World Cup and European Hockey Championships.

Their product streams live data in real-time through their software as well as logging all data after a training session or match for full analysis by the performance coach.

So what will STATSports be doing at the Rugby World Cup?

General Manager, Paul Johnson said, “The team at STATSports will be supporting a number of our current clients as well as being on hand for the sport analysis teams. The Rugby World Cup is a fantastic sporting event and we are proud to be involved with the England and Ireland set up.  Measuring a player’s performance has become so important to teams involved at the elite end of sport.  The margins of success are so small these days but providing live data on an individual players performance can be the important factor in terms of success.”

So what does the future hold for STATSports?

In January 2015 the company opened their American Headquaters in Chicago and hired a huge amount of new staff to cope with demand. STATSports have already signed up over 30 professional teams across the NFL, NBA and MLS including the Carolina Panthers, Cincinnati Bengals, Chicago Bulls, Washington Wizards and LA Galaxy. They have also entered the collegiate market in America including signing a deal with the number one ranked college basketball team University of Kentucky. Finally, they have recently signed a league wide deal with the RFL in England and the AFL in Australia which will see them enter the broadcast industry in late 2015.