AZ Alkmaar is a top-tier club playing in the Dutch Premier League. With two national titles and 4 national cups, AZ has traditionally been the main competitor of the traditional top 3 (Ajax, Feyenoord and PSV). Amongst the most notable players are Jozy Altidore, Sergio Romero, Ron Vlaar, Vincent Janssen and Moussa Dembele and the club has been coached by Louis van Gaal, Dick Advocaat and Marco van Basten.

AZ is a club that had suffered setbacks during the economic crisis. Now, years later, the club has successfully recovered and has quickly become one of Holland’s most innovative football organizations on-pitch. The club is known for its outstanding Academy which is being visited by top European football clubs like Real Madrid. Having won many international awards for its outstanding performance, the AZ Academy has produced many football talents thanks to an innovative data-driven performance approach. In 2017, the club has started to also install a data-driven approach on its marketing side. With the recent appointment of sports marketing consultancy Two Circles, the club has set focus on improving fan communication, fan engagement and the stadium experience.

“We have set focus on improving fan communication, fan engagement and the stadium experience”

AZ is currently in the process of transitioning the traditional marketing approach to a data-driven marketing approach. As part of this transition, AZ has adopted a model which helps to structure the fanbase. The model, shaped like a pyramid, divides different fan purchase behaviors over three layers. This then provides strategic guidelines on how the club’s fanbase strategy should be executed and which segment deserves focus per match. The top layer of the pyramid contains all the season members and ideally should be slightly less than half of maximum stadium capacity. In this way, the model leaves room for general admission tickets, which are economically more valuable. The mid-layer of the pyramid represents fans that visit 2+ matches per season on general admission. The bottom layer of the pyramid are the fans that occasionally visit the club once a season. Ideally, the entire registered fanbase contains 8x the stadium capacity. In this way, optimal conditions for maximum stadium revenue can be achieved.

Using data to increase relevance (and to cut clutter) 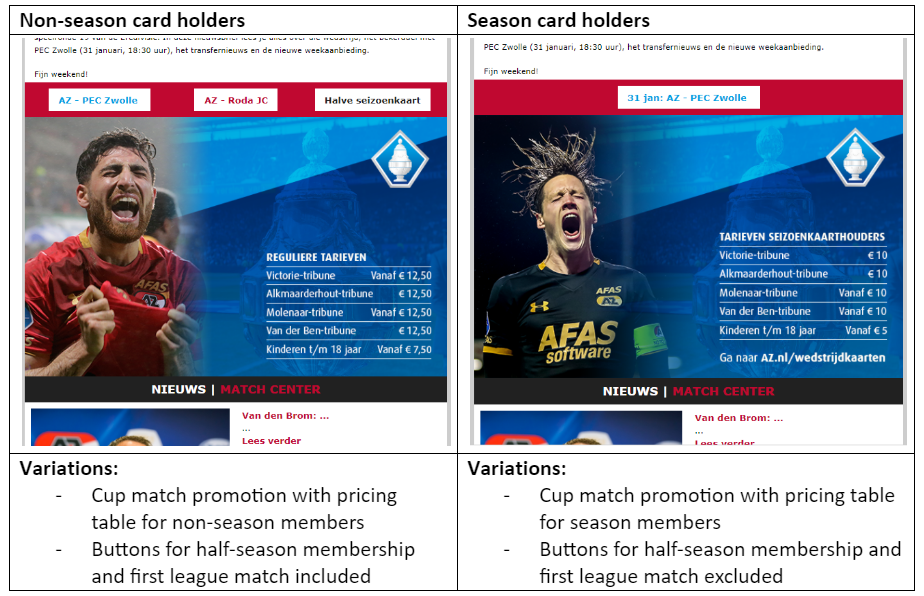 AZ has started to install various automated marketing programs. Inspired by programs common in retail, every AZ-fan now receives a personalized e-mail with a match ticket discount code on his/her birthday, also depending on its fan-status. Therefore, a set of variations for season members and non-season members has been installed.

This being a small marketing automation campaign, the revenue per e-mail has more than doubled since the discount codes were added. The overall marketing automation strategy will provide AZ also with automated feedback systems on the fan experience, follow-ups on ticketing behavior and automated re-engagement programs. For example, if a fan hasn’t visited the stadium in half a year where his historical data shows he usually visits one match every two months, AZ is planning to send this fan automated communication from the club asking if we can help. If necessary, a customer services employee will be triggered to contact the fan to solve any problems that he might experience. Also, AZ is planning to install a program which will automatically survey matchday visitors to structurally identify hiccups in the customer journey. Secondly, this will provide the club with intelligence to identify new product opportunities. 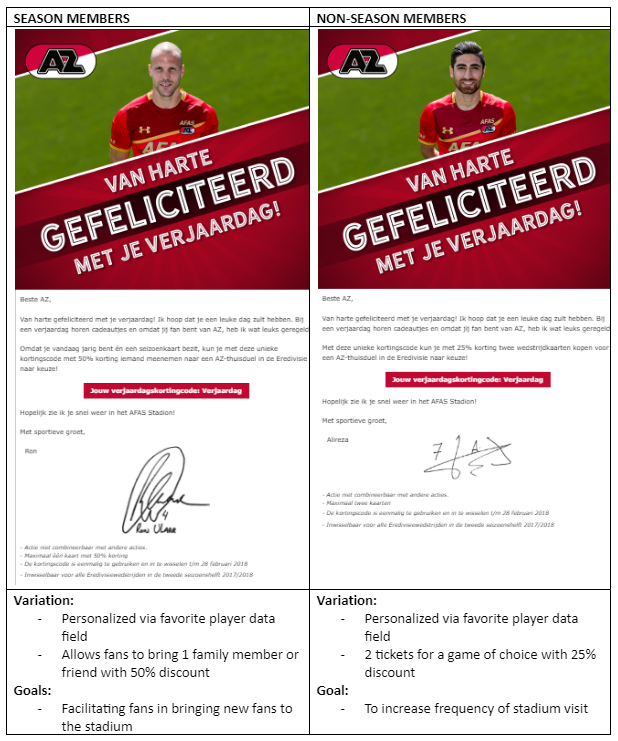 AZ has recently started to experiment with delivering data back to the fans. For the half-season membership campaign, AZ has applied data intelligence in the campaign to create a WOW-moment. This minor data-driven approach has immediately led to the best open rates and click rates in campaign history so far. 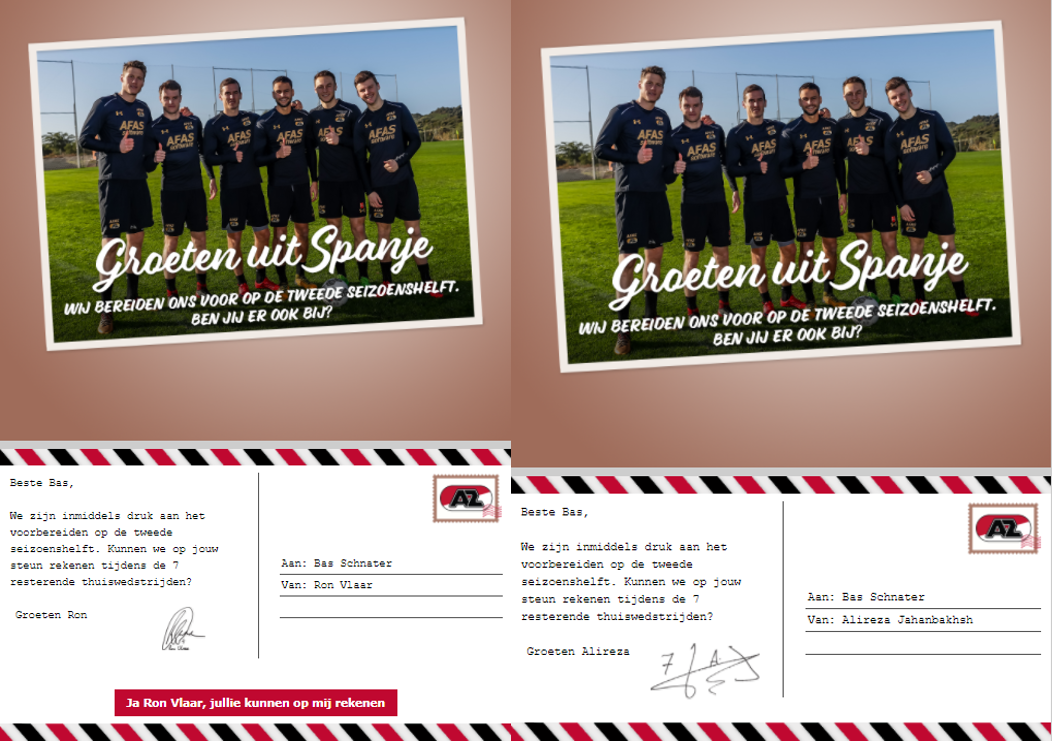 Simply by using data fields such as ‘favorite player’ (which is being collected at every opportunity) and the first name of the fan, a personalized campaign had been created. When the first team was on training camp in Spain this winter, every fan received a digital post card from the team send by their favorite player complete with autograph. As variation within the campaign, two editions were made. Non-season members received a postcard with call-to-action button leading to the half-season membership campaign webpage. Season members received a post card without the call to action, it simply being a WOW-moment and showing appreciation for their support.

With the club’s new marketing approach, AZ has started to implement new ideas and is ambitious enough to experiment. Clearly, transitioning an entire organization towards a data-driven organization is a project that will take years to complete, but by structurally collecting intelligence and fixing quick-wins such as the previously described campaign, improved fan engagement is easily within reach.

Bas Schnater is Fan Engagement & CRM Coordinator at AZ Alkmaar. The club is increasingly focusing on data-driven business operations which has led to a sharp increase in stadium attendance.

If you want to interact with Bas, you can find him on LinkedIn or Twitter.

Geoff runs his own Sports Consultancy, working with clients such as FIFA, UEFA and FIBA across the world. He is also on the board of Tourism Northern Ireland. You can follow Geoff on twitter @geoffwnjwilson or connect on Linkedin at linkedin.com/in/geoffwnjwilson

Drop me an email to geoff@geoffwilsonconsultancy.com if you would like your sports club or Federation profiled in the up and coming months.