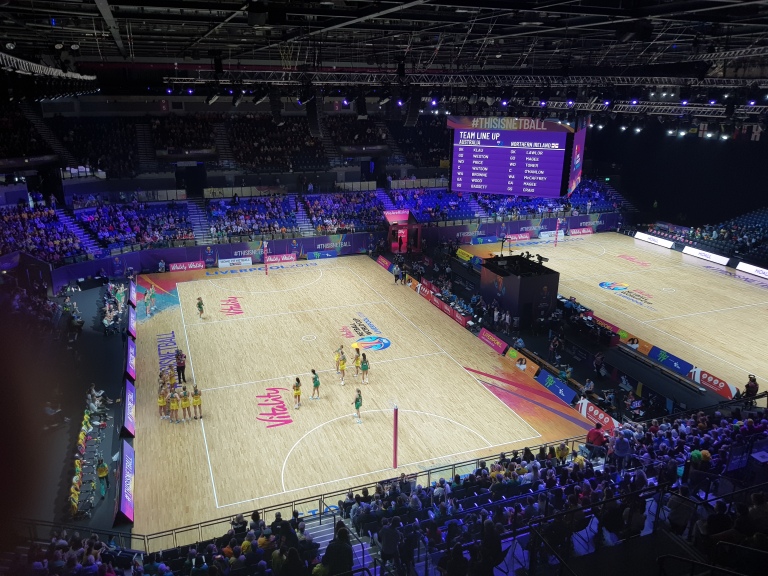 This month I had the privilege of attending the Netball World Cup in my role as Chair of Netball Northern Ireland.
Even though I was at the tournament in an official capacity, I was impressed with the set up, promotion and delivery of the event.
This blog outlines the key learnings which other sports can also adopt;
1. One single brand message (#ThisIsNetball) and creative image (purple based creative) used in all the marketing and event promotional material – from ticketing to on street branding to the match programme to digital platforms and content. The consistent message and creative approach was evident throughout the city, venue and online which helped to portray a professional image of the tournament.
2. As mentioned above, there was substantial branding on street lamp posts and high footfall areas by the city council and the tournament sponsor. One of the areas branded was the big wheel at the docks. This acted as a huge billboard promoting the event to thousands of supporters, the general public, tourists and businesses.
Partnerships between the sponsor, city council and the event organiser is a great way to promote an event, being able to use key city assets such as street lamp posts, squares etc to get the message across.
3. Merchandise stand – clearly branded stalls were located at the venue and at the fan zone in the city centre. A nice touch was not only the event specific merchandising but that each participating country had their own branded T shirts and accessories.
4. Great location – the location of the venue was within walking distance of the main shopping areas of the city. In addition, the team hotels where also close by making it easy for teams to access the venue and media facilities.
5 BBC/Sky streamed the matches. Broadcast is a key component of any major tournament and the Netball World Cup really did well to secure both BBC and Sky on board as partners. The games where broadcast live on youtube or via the partners websites/apps with highlights packages produced each day. The quality of the coverage (number of camera’s), commentary and behind the scenes content was superb. This one component has helped to put netball back on the sporting map.
6. Digital coverage. The organisers did a great job on capturing and distributing content on their various social platforms – from game highlights to results and post match interviews
7. Fan zones. Two fan zones where created. One near the city centre and one at the venue. Both fan zones where well attended with sponsor activitions and netball related games on offer for fans and the general public to enjoy.
8. Welcome staff/Volunteers. An army of volunteers took part in the tournament. Any volunteers that I came into contact with were friendly and helpful. Obviously training had been provided.The team of volunteers played a vital role in making the tournament a success.
9. CSR programme. The Netball World cup joined forces with Cancer Research UK. Not only is this a fabulous charity to support but it provided the Netball World Cup with another marketing platform to communicate it’s key messages.
Like any event, there are also a number of areas which the organisers could consider for future tournaments;
1. Ticketing- there seemed to be an issue with the delivery of a small number of tickets. I didn’t get my tickets until 2 days before the first match. As ticketing is a vital component of any event, this needs reviewed with plans put in place to ensure smooth delivery of tickets for fans. That being said, I did receive an email from the organiser a number of days into the tournament providing a solution to the issue. While the ticketing issue shouldn’t have happened, the organisers did move quickly to implement a solution to the issue.
2. Additional entertainment and engagement with the fans could have been conducted ‘inside’ the venue. Entertainment was provided inside the venue but I felt it was limited and required further thought in terms of fan activation. Engaging the fans is a keycomponent of any tournament.
3. Corporate Hospitality – The corporate hospitality offering was extremely limited. The stadium did have corporate boxes but no food or drink was included as a package. Creating a range of hospitality offering might be a new revenue opportunity for the organisers for future tournaments.
I have been involved in netball for almost two years and I was very impressed with the organisation and delivery of the tournament. Netball is growing!!!! #ThisIsNetball

Geoff runs his own Sports Consultancy, working with clients such as FIFA, UEFA, AFC and FIBA across the world. He is also on the board of Tourism Northern Ireland. You can follow Geoff on twitter @geoffwnjwilson connect on Linkedin at linkedin.com/in/geoffwnjwilson